A traditional Japanese music performance was held at the University of Queensland on 20 August as part of Japan Week 2008. 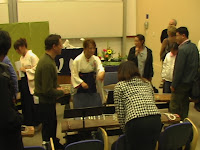 JETAA (Qld) members and public who attended enjoyed the many sounds of hogaku, traditional Japanese music. The performance featured around 6 pieces played by 7 koto, shakuhachi and shamisen performers direct from Japan.

After the performance, the audience was invited down to the stage to inspect the instruments up close and have a try themselves. For those who are interested in hearing the relaxing sounds of these evocative Japanese instruments, check out the CD available from Itotake, a Queensland-based koto and shakuhachi group, here.
category: events, photos
Newer Post Older Post Home